This post may contain affiliate links. If you buy something after clicking on one of these links, I may receive a commission. The cost to you stays the same, though. 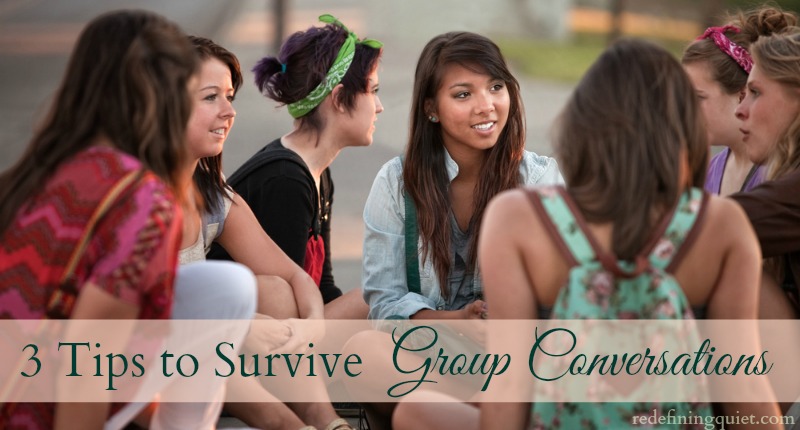 Group conversations. Do those two words make you feel tense? Do you feel your stomach getting a little tighter and your pulse rising a bit? If you do, you’re like a lot of introverted people!

While we enjoy getting to know other people and connecting with them, big group conversations aren’t really our thing. A lot depends of course on the size of the group, how well we know the people in the group, and even how much energy we have on a particular day (the more drained we are the harder group conversations will be.) In general, though, many introverts prefer spending time with a couple of close friends or maybe a small group at a dinner party or something like that.

1) Accept that You’re Not In Your Element

Introverts tend to be more in our element when we’re part of a conversation that moves at a relaxed pace and that allows us the space we need to think before we speak. Group conversations, on the other hand, often move very quickly, especially if there are a lot of extroverted people in the group. It’s like playing an extra fast version of the Wonder Ball, only the ball often gets passed back and forth only by the more talkative members of the group, and it passes right by the quieter, more introverted members. This quote from Introvert Power sums up the difference between the two types of conversations nicely:

“Introvert conversations are like jazz, where each player gets to solo for a nice stretch before the other player comes in and does his solo. And like jazz, once we get going, we can play all night. Extrovert conversations are more like tennis matches, where thoughts are batted back and forth, and players need to be ready to respond. Introverts get winded pretty quickly.” ~ Laurie A. Helgoe, Introvert Power

It can be frustrating for us introverts when we think of the perfect thing to say, but we either can’t get a word in edgewise or we think of it too late and the conversation has already moved on to a new topic. As frustrating as it may be, though, it can be helpful for us to remember that we’re not in our element. We might not be able to contribute as much to a group conversation as we can to a more intimate conversation with a few close friends.

2) Be an Engaged Listener

Everyone loves to feel like someone is listening to them. And not just halfway listening while they think of the next funny story they want tell, but really listening. Being fully present and listening with the intent of trying to understand.

Introverts aren’t necessarily better listeners than extroverts are (especially since we can be distracted by our thoughts and our internal processing), but we do usually have more practice listening since we tend to do it a lot more often. Since we are often in the “listening” role in group conversations, one of the best things we can do is to focus on becoming a really good listener.

We might not always be able to think of very much to say during the conversation, and we might not be able to entertain everyone with a hilarious story like some people are so good at doing, but the one thing we can do is to leave people with the feeling that we have truly listened to them – that we’ve appreciated their stories, laughed at their jokes, and really tried to understand them.

And another benefit of listening is that if we’ve been active listeners and if we’ve been using our natural introverted tendencies of reflection and observation, we might find that we can even think of something interesting to add to the conversation – like maybe a different perspective that others hadn’t thought of or a story that connects to that topic.

3) Relax the Pressure on Yourself to Contribute

Finding out about the fact that I’m an introvert has really helped me a lot with this one. Once I realized that it was my natural tendency to be a quieter person and a listener and observer and that I’m more in my element with one-on-one conversations or in smaller groups, I was able to stop putting so much pressure on myself to always try to think of something interesting to say. That mindset of feeling like I had to say something usually backfired because then my mind would freeze and I wouldn’t be able to think of anything to say at all.

What I’ve found, though, is that by relaxing that pressure and by allowing myself to just listen, I’m a lot more likely to actually be able to think of something to say. Not all the time, and I still have those mind-going-blank moments a lot, but it’s less often than it used to be. And even if I can’t think of something to say, but not feeling like I absolutely have to say something, I’m a lot more able to just relax and enjoy listening to the conversation.

If you’re an introvert, what things have helped you in group conversations? 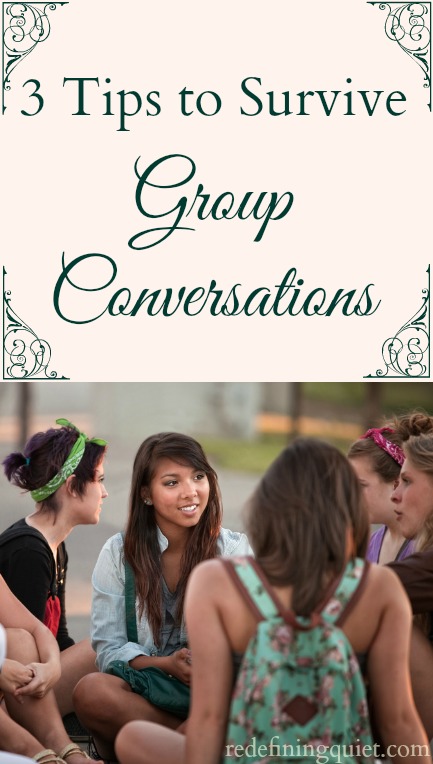 ← Are You Taking Advantage of this HSP Benefit?
Do Introverts Lack Initiative? →

One Response to 3 Tips to Survive Group Conversations